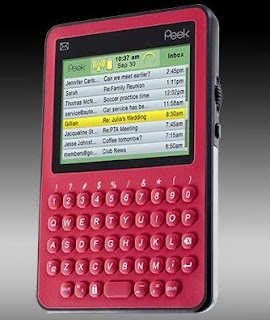 I bought my mother a Peek email device. She's not very interested in technology or email, but my sister and I thought it would be nice to get her connected this way, since, with her hearing loss, it's hard for her to use the phone.
The goal of the Peek is simplicity.
Features It only does email, to keep it simple. It doesn't do web or make or receive phone calls, even though it uses a cellular network.
User interface It has a click-wheel on the side, like previous generation Blackberrys. There are very few menu choices, though I think a Palm-OS touch screen and user interface would have been nicer.
Cost I paid $50 at target.com. List price is $80. Service is $20/month, which I'm paying as a gift. No contracts, no commitments. I can cancel any time.
Setup Super easy, though I did it for her. You tell it your email address. It has to be with a major email provider, because they know all the required settings for the major providers. You have to do a confirmation, log into the web on a real computer, give your credit card information. I believe it will be easy for a relatively non-technological user.
The computer at my mother's home is set up in an uncomfortable position for her. Plus I thought a small device she can keep in her bag would be handy.
She says she's reading her mail every day, though she hasn't replied yet. My sister and I are hopefull that she eventually start replying. Later, she may start composing her own new emails. In the meantime, we're trying to send her interesting daily gossip to develop an incentive to keep reading her mail.
Posted by Tom Reingold at 8:49 AM No comments:

Someone read my blog today and said I have a full life. It threw me for a minute, and then I realized I'm lucky. So I feel grateful.

Tonight was the first night since Jeanne arrived that we were all able to sit down to dinner. We had two guests, too. Julia's friend Vallie came home from school with Jeanne and Julia. And a bit later, Peter came by. He brought some bike stuff to drop off so we can work on it later. Carol and I left Peter and all the girls in the house while we went our separate ways to rehearsals in different groups we belong to. Peter stayed because the agreement with the exchange student group is that we don't leave the kids alone inside with no adults.
Posted by Tom Reingold at 9:43 PM 1 comment:

I'm riding my bike to work occasionally nowadays. I really enjoy it. Today was an excellent ride in. The sky was cloudy, and it was cool and damp but not at all cold. I was well dressed for the weather, or really, slightly overdressed, but that was fine.

It's ten miles each way. The ride to work is pretty much all uphill. This morning, I found that I have reached a point where there is no stretch that feels truly difficult. Part of that is the condition I am in, which has improved over the last year. Part of it is that I just changed the bike I'm riding. I put different handlebars on it that don't require me to reach far forward, though they are quite low. I also changed the pedals to the kind that require special cycling shoes with cleats. The cleats improve my efficiency, and the shoes are very comfortable.

I rode past the row of stores near the Short Hills train station. It's a picturesque row on Chatham Rd. But there are a lot of closed storefronts, a sign of the economic times. However, my ride through Short Hills and Summit sees only very well kept homes and properties. The landscapers and improvement workers are still busy. Word has it that business is down for them, but there's no evidence of that along my route. I wonder how life will look if the economy gets much worse. Will lawn upkeep fall down in these tony towns? Will families be doubling and tripling up in these big houses? Will there be shantytowns here or anywhere?

I find I'm not really dreading any of this, for some strange reason. We were due for a change. Our society had become too comfortable. We'll relearn some skills, like growing food on our properties and reusing things rather than putting them in the garbage.
Posted by Tom Reingold at 10:20 AM No comments:

Last night began Yom HaShoah, the annual day of memorializing the Holocaust. I sang in the service at my synagogue. We joined forces with two other synagogues in Summit, NJ, Temple Sinai and Summit JCC. (Yes, the latter really is a synagogue.) The other two synagogues have paid cantors who are also choir leaders, music directors, whatever you call them, and they're both very good. So all three rabbis were there, members of the choirs sang together, and there were guest speakers and readers. The service was quite moving. I sang a solo part in a song called Herman's Nigun. A nigun is a wordless song of prayer. I don't have a lot of solo singing experience, but I got a ton of feedback from many people telling me it was beautiful and moving. I was glad that I was able to help them feel something. One person said jokingly that I'm a star, but that seems wrong. I did it to serve others, not to glorify myself. And I owe a lot to Cantor Krupnick, who explained the goal and inspired me right before the service. She said we are to reach out and invite everyone to join in, either by singing along or just by listening.

There was a slide show at the end, showing a two-week tour of concentration camps in Poland and in Israel. Very stark and moving. This tour happens at least once a year and sounds worthwhile. I'd like to do it one day.

Tonight, I'm singing with Harmonium in another Yom HaShoah service, this time at Grace Madison Church in Madison, NJ. I'm pretty sure it's an interfaith service. It should be nice, but I regret not being home for dinner with my family.

Right before last night's service, I drove Julia plus her friends to orchestra practice in Madison, which they have every Monday night. Jeanne came along for the sake of visiting. Julia's bass takes up part of the hatch in my car plus one seat. We had Julia, Jeanne, Nicole, and Vallie, so really, there were more people than available seats, and there was the typical teenage banter, this time in English and French. It was fun. On the way, we stopped and ate a rushed pizza dinner at the Trattoria in Summit. Nicole's mother drove Nicole and Jeanne and Julia home. One of Vallie's parents drove Vallie home.
Posted by Tom Reingold at 12:49 PM 2 comments:

Jeanne and the animals

Jeanne doesn't seem enamored of our four animals, but no one can resist laughing at Booger, our very silly and personable black cat. Carol was teaching Jeanne and me some yoga in the kitchen, where she brought her yoga mat. First, Booger walked under Jeanne while she (Jeanne) was on her hands and feet. Then he settled down beyond Jeanne's feet and grabbed and bit her foot. She screamed.

Later, Booger was "fighting" with a shopping bag and got tangled in it. It was funny to see him fight with it to get free.
Posted by Tom Reingold at 9:43 AM No comments:

Our French exchange student and a bike ride

Saturday night -- very late Saturday night -- Jeanne and 10 other kids arrived together from France. There are three adult chaperones. Everyone is staying with different families from The Hudson School (in Hoboken) where Julia attends. The French students will be here for two weeks.

Jeanne is 14 years old. She's acting a bit shy, but I'm sure it's because everything is new here. She's a delight, and she's quite willing to try everything. Julia has gotten her to laugh many times. She speaks very quietly with Carol and me. Julia speaks French very well. Jeanne speaks English fairly well, but sometimes we speak in French. Carol's French sounds bad to my ears, because I'm such a darned perfectionist. Carol mixes French and English in the same sentence and pronounces some French words with a Spanish accent, and she mixes up tenses etc. But she's a more effective communicator than I am, because she's willing to try anything.

Carol and I took her to Whole Foods and helped her plan her lunches for the week. We let her try many foods, and she chose three French cheeses. We could learn a lot from her!

Julia and her girlfriend Vallie went with her to the Village Trattoria in Maplewood. They had a good time and met up with some kids who go to Columbia High School, the school Julia used to go to in Maplewood.

Then Carol and Jeanne and I took a bike ride. Jeanne said she's entering a triathlon in June.

The bike I loaned her is a really nice bike, but it's at least 30 years old, and Jeanne was too scared to try shifting the gears with the downtube shifters. Kids are spoiled, huh? So she stayed in the gear I put the bike in, which was a medium gear. At first, I wasn't impressed with her pace, but then I realized I don't know anything about 14 year old girls and what they're capable of. I thought maybe they don't go very fast. After a few miles, we headed up a long hill. That's when Jeanne began to shine. She's 5'2" (1.57m) and she probably weighs 90 lbs (41 kg), and that physique gives her a hill-climbing advantage. She just kept her pace and scooted up that hill like it was nothing. "Tu es forte et vite!" I yelled. ("You are strong and fast!")

I was hesitant to tell Julia, because Julia's heavier than she thinks she ought to be (which isn't true) and seems to feel bad about not being a fast cyclist. I told her how it went, and she was pleased to hear it.

Jeanne declined to have any toe clips on her bike. I refuse to ride without them, and she'll benefit from them (or cleats) eventually, but it's even more impressive that she climbed the hill so ably without them.

In the evening, Julia and I had a rehearsal to attend, and Carol had another rehearsal to attend, so Carol dropped Jeanne off at Donna's house. Donna's son Corey goes to Hudson School, too, and they're hosting another of the French students, so Jeanne ate at their barbecue. I hear she had a nice time, and she was able to translate for everyone, because their student, Clement, doesn't speak English as well as Jeanne does.

This morning, Jeanne and Julia left early for school, as they will do every morning. They were out of the house at 6:55.
Posted by Tom Reingold at 9:28 AM 6 comments: